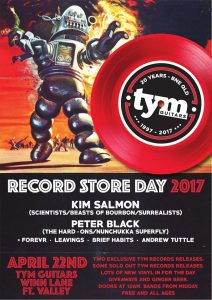 Once again Tym Guitars have organised an outstanding Record Store Day event with some huge names and very special releases. Details below…

There will be TWO exclusive Tym records releases, to be announced SOON, available on the day. One 12″ and one 7″ EP will be out through Tym records and will be available through select independent record shops in other capital cities from RSD.

We will have our live DJ spinning vinyl all day with lots of ginger beer and like minded people to hang with while you enjoy live music and flipping through the racks of new vinyl, and some (very) hard to get sold out Tym records which will be arriving especially for the days celebrations.

Kim Salmon really needs no introduction but here’s one anyway. Kim and his early revolving members formed the hugely influential Scientists in Perth in the late 70’s who single-handedly introduced the world to a sludge heavy style of bluesy rock ‘n’ roll that would become the cornerstone for a sound that took over the world in the early 90’s.
Having already moved on by ’83 he then worked in the monstrous Beasts of Bourbon with Spencer P Jones and Tex Perkins and a couple of his old Scientists band mates and released the Axeman’s Jazz, another blueprint of Australian R’n’R.
In amongst these commitments he formed Kim Salmon and Surrealists and all through the rest of the 80’s and 90’s he continued to form bands and push boundaries with old and new friends including Antenna, with Dave Faulkner, STM with Warren Ellis and Jim White, the Business, and then the Darling Downs with Ron Peno.
He entered the 2000’s with an instrumental group with Clare Moore, Dave Graney and Ash Naylor along with others. Never happy to sit still he has so many other projects and bands it’s almost impossible to keep track of them all.

Peter Black is one of Australia’s hardest working musicians with his bands The Hard-Ons and Nunchukka Superfly and his SAD project from 2016 where he wrote and recorded a song, every day, for the entire year.
He also has a prolific solo career having released 3 LP’s in 3 years and toured relentlessly both by himself and with these bands.

FOREVR are a Brisbane band combining their love of real shoegaze with electronics to produce lush, loud, beautiful noise larger than the sum of it’s parts.
This 4 piece brings together massive driving guitar tones and ethereal vocals and heavy synthesizer, along with live drums and bass to make amazing soundscapes.

Leavings is a three piece punk band from Brisbane who combine aggressive bass with heavy drums, offset by discordant and angular guitar tones and yet keep a sense of melody and great hooks.
Reminiscent of many great punk bands but impossible to put into one camp or place, they sound refreshingly new while having a sense of familiarity.

Brief Habits are a 4 piece rock band from Brisbane who combine their love of indie-rock with punk and make it slightly more technical than the run of the mill affair.
There’s hooks and riffs everywhere mixed in among some of the catchiest pop songs with heartfelt lyrics sang with a genuine conviction.

Andrew Tuttle is based in Brisbane and creates an instrumental sonic convergence of improvisation and composition; and electronic and acoustic tones. Performed on instrumentation including computer, banjo, synthesiser and acoustic guitar; Tuttle’s recordings and performances encompass elements of abstract folk, experimentalism, soli guitar, kosmiche and minimalism.