Continuing our ad hoc series about Record Store Day lovers and their music collection, here’s a post from Tony Kingston, who is so super devoted to his records he took this pic specially for here.  Pic taken by Jasmin Mavin. 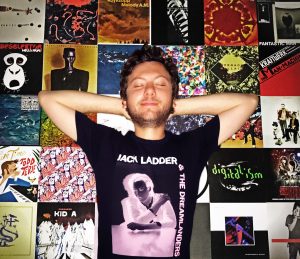 My obsession with vinyl records began fairly recently in mid-2016, while I was crate digging for someone else in Berlin at HHV and the famous Oye Records, where I spent a number of hours during the one session. I loved the feeling of not knowing what I’d come across and I was instantly drawn to the beautiful cover art. Since that moment, I knew it was a hobby I wanted to be involved in.

When I first started building my collection, I really wanted the records I purchased to reflect the music I had been listening to throughout my entire life, not just the present time. 130 records later, I am (almost) satisfied I have managed to capture the music I was listening to from the young age of 16, to my current age of 30.

Here are some personal stories behind a handful of the records in my collection..

This particular record will remain in my memory forever. It was Schoolies Week towards the end of 2004 and a bunch of my close friends and I were staying at a Hotel in Airlie Beach. The sun was shining, the drinks were flowing and we had this LP pumping constantly. We honestly must have played it at least 30 times throughout the week. The opening track ‘Feel Good Hit Of The Summer’ provided an appropriate soundtrack to our crazy shenanigans and since then, it has been my go to album when re-visiting rock music, or simply to reflect on that unforgettable experience.

Whenever I think about attending music festivals in my early 20s, Cut Copy are one of the artists who immediately spring to mind. Like a lot of people who grew up in that golden era, I was convinced that indie electronica was the best music on the planet. Bang Gang DJs were my heroes as selectors and I was completely energised by the amount of quality Australian dance artists emerging at the time. It was a really exciting period which included some of the best festival experiences of my life.

One specific festival experience involving Cut Copy which stands out for me was when I attended Good Vibrations Sydney in 2007. It was before their breakthrough album ‘In Ghost Colours’ had been released so they weren’t overly popular at the time, therefore the band played an early afternoon slot on the main stage. Prior to the event, I had sussed out they were going to do a meet and greet in a certain marquee near the stage, so following their performance, being the fanboy I was, I promptly made my way to that direction.

As I was waiting patiently in the marquee for the band to arrive, while simultaneously watching the performances on the big screen, I noticed all three band members sitting alone on a nearby couch with literally no one surrounding them. This is when I thought it was a good time to get in early to meet them so I walked over to the couch, confidently sat down next to them and proceeded to introduce myself. Following that, Tim (guitar/synth) and I got into a fluent conversation about music in general, in particular the music on their FabricLive Compilation album which was released the previous year. After finally realising who they were, a number of photographers then appeared out of nowhere and started continuously taking photos of us while we posed together as a group, because they were under the impression I was also in the band!

This is without a doubt one of my favourite albums of all time and it was a release which introduced me to the experimental electronic sound I’ve been enjoying so much today (ie: Kiasmos, Gidge and Floating Points to name a few). His latest LP ‘The Triad’ was actually the first record I ever purchased (partly due to its availability) but it certainly wouldn’t have felt right if I didn’t add ‘Black Noise’ (my 5threcord) to the collection as well. The unique sounds master Hendrik incorporates into his music fascinates me on every listen and he’s an artist I will always see perform live if given the opportunity.

Sometimes it’s rewarding to buy a record without knowing too much about the music or the producer. Occasionally, I just preview a few tracks from a release (usually via Juno Records) and become instantly addicted, resulting in me purchasing it without hesitation. This is without a doubt one of those special records where this occurred.

Lord Of The Isles is now one of my favourite electronic producers and I’m currently working my way through his massive back catalogue of releases, which includes about 15 EPs/Singles from many recognisable labels such as Phonica, Mule Musiq, Permanent Vacation and Firecracker Recordings. A Discogs user described his debut LP ‘In Waves’ perfectly: “This is incredible. If you’re a fan of house, balearic, ambient etc, DO NOT SLEEP ON THIS”.