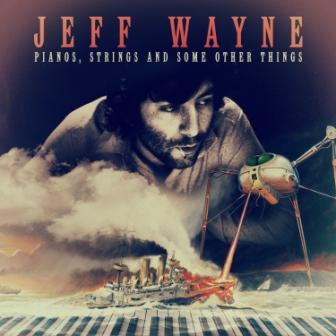 ‘Pianos, Strings and Some Other Things’ comprises Jeff Wayne’s exquisite new instrumental compositions, which re-imagine some of the most loved tracks from The War of The Worlds  – ‘The Eve of The War’, ‘Forever Autumn’, ‘The Red Weed’ and ‘Brave New World’. Composed and recorded by Jeff Wayne at Ollie Wood Recording Studios, ‘Pianos, Strings and Some Other Things’ breathes new life into the masterpiece album, which remains a firm favourite to millions around the world.

Of the EP, Jeff says: “The opportunity to re-visit themes and songs from my original score and production of The War of The Worlds, was something I’ve thought about over time. I just didn’t think it would take 40 years to come to fruition. But thanks to Sony Music, they encouraged me to stop sitting on the egg, but to hatch it.” He continues: “The concept is all about taking my original scores, and re-scoring and performing the parts for an orchestra of pianos, retain my original symphonic strings and throw in ‘some other things’.  I was originally going to title this EP – ‘The Egg and I’ – but decided on ‘Pianos, Strings and Some Other Things.’ Either way, I think we cracked it.”