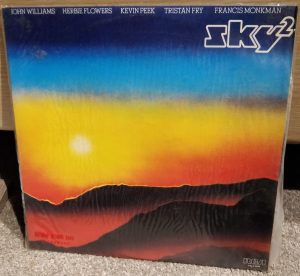 The oldest record I’ve got is from an Aussie band called Sky from 1980, I got it as a hand me down from my Dad, its got a lot of really nice instrumentals, which is right up my alley. love that stuff. 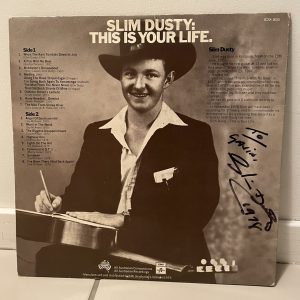 Slim Dusty. This is your Life

Mum and Dad went to a concert of his in 1978 and Slim signed an album for me and one for my sister. I was four at the time and we had to stay at the Motel while Mum and Dad went out. 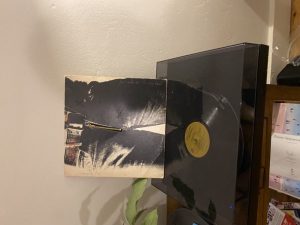 How is the easy part, it’s the why.
When I was younger my parents had a bunch of vinyl. My mother, being English, was a big Stones fan. We weren’t very well off and we were getting some sort of repair work done at home.
The builder saw the record collection, and offered to take payment partly in vinyl. So my mother parted with her original Stones – Sticky Fingers with the working zipper that reveals the Warhol cotton briefs underneath.
Recently I’ve bought a player and have started collecting, came across this one with the same working zipper in an eBay sale so had to buy it. It’s only from 71, and literally arrived today – so is both the oldest and newest vinyl I own. But I’m just giving it a few spins before gifting to my mother. 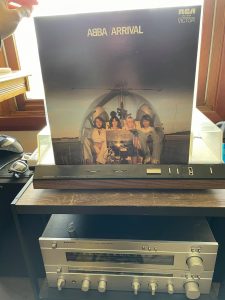 Because I got my first lot of records all at once I never really had that legendary “first record” moment. My great-great Aunty Fay died in 2012, when I was 15 and learning the meaning of the word ‘alternative’. She was a neat old lady who doted upon children, gave me shortbread biscuits for Christmas and always put too much salt on her vegetables. She was also the only person I knew at the time who still owned a turntable, though I had never heard her play anything on it.

After the wake I did the only sensible thing and claimed the Sanyo stereo set for myself, along with the small collection of LPs that came with it. This sudden acquisition gave me the curious experience of listening to the music of a life now past, trying to picture when and how my aunt had first heard these songs. Was Bing Crosby playing at a dance when she first saw Stanley, the man with whom she would later elope to Sydney? Did Vivaldi drift from the radio while she straightened out her first newly built home? Did she hum along to ABBA as she made dinner? Was the country and western collection her own or Uncle Stan’s? Did she ever play it after he died? Had she ever just sat, alone in her lounge room, and wept over a particular song that struck her heartstrings?

I would never know for sure, but afterwards I knew my old aunt better, perhaps better than I had while she was alive. I had heard her music, her soundtrack, right down to the final song: Fernando by ABBA, the song that played as they rolled her coffin away. I think of my aunt whenever I spin her wax, and I often wonder who will listen to my own records when I am gone. 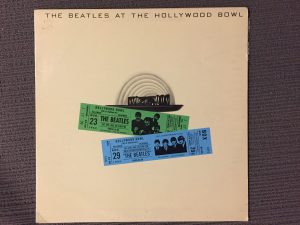 The Beatles At The Hollywood Bowl

I discovered this in my Mum’s vinyl collection when I was 13. It wasn’t long before she noticed my enthusiasm for it and ‘let me have it’. The Beatles At The Hollywood Bowl was my first time hearing The Beatles. I’m grateful this was how I first heard them, as you can literally hear Beatlemania itself, alongside the music.

The energy and excited screams from fans just added to what I was hearing. I had never heard anything like it – at times the crowd virtually drowns out the band. The lack of foldback in those days is evident too, with Paul making the mistake of asking at one point, “can you hear us?” – which just causes the crowd to scream louder!

The musicianship of the guys, the harmonies, the onstage banter. It is all captured perfectly here and when combined, caused me to fall in love with The Beatles first listen. Thanks Mum! 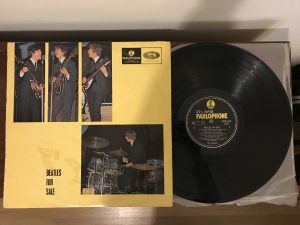 The Beatles – For Sale – 1965 Australian Pressing

This awesome record by The Beatles was purchased brand new by my Mum back in 1965 as she was a massive Beatles fan…and still is! I caught The Beatles bug from my Mum and now my daughter has too! It’s a great record and has been enjoyed for many years by three generations so has a lot of family history behind it. Here’s to many more years of enjoyment coming up! 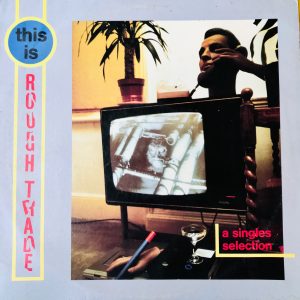 This is Rough Trade – A Singles Collection

While possibly not the oldest in my collection, this album is certainly one of the earliest I remember buying on vinyl ( was it Canelands Records?) & that fortunately hasn’t disappeared or been trashed over the years.

This find was a seminal introduction to so much music that shaped my budding teenage tastes – especially growing up in 1980’s Regional North Queensland.

Along with my Tuesday late night ABC idol, Suzanne Dowling on Rock Arena, it changed my musical landscape & the two are kind of inextricably bound in memory & my exploration of alternative sounds at the time.

I always say that Rock Arena saved my life.
Well it felt like it at the time…
And it led me to this record & to even recognise the label & some of the bands names on it which I came to love…like The Smiths, The Go-Betweens, The Fall, Aztec Camera… which opened me up to more & more artists that might have taken me yonks to otherwise hear of… you know how the winding tales of discovering music go…
so yeah I reckon it saved me too.
Unlike the blurry clips of Rock Arena – I can still play this record & Rough Trade lives on too! 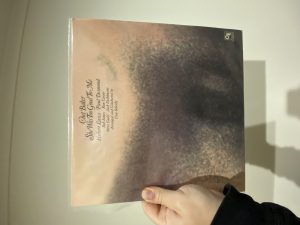 Whilst studying in Italy, I went on a day trip to Bologna. In the Bologna city centre, in the Quadrilatero, there is a street known as “La strada del Jazz” (Jazz Street), named after the gold stars dedicated to the greatest Jazz players of all time. I stumbled across the gold star of my favourite jazz artist Chet Baker. The next day in the Florence city centre I went into a used record store and found the “She Was Too Good To Me” album. I’d never seen it before and had never been able to find in on vinyl in Australia. The owner of the store even gave me a discount on the album after I told him the story of the day before. I also got a tattoo of Chet to remember the whole experience. 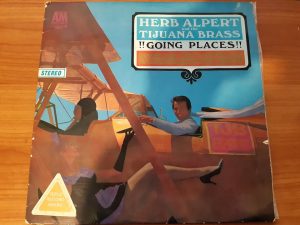 My great-grandad passed away in the mid 2000s, and heaps of his records ended up at our house. I was about 10 years old and remember that my parents bought a record player so we could listen to them all. This record is so fun from the very first horn at the start of Tijuana Taxi. I loved the tone of the trumpet and it was part of the reason I started learning the trumpet soon after. Really glad that these records were passed down to me. 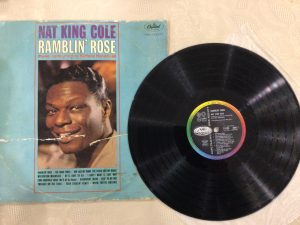 I inherited this album from my beautiful Nan Armstrong. She loved to play this album while she potted around the house doing her housework. I also inherited her HMV valve radiogram which still runs and sounds warm and sweet. I play this album on her stereo and it brings back the most wonderful memories. I miss you Nan I got this album as a Christmas present from my Grandmother. I loved it to death and would constantly play it, even singing with a Chipmunk voice. 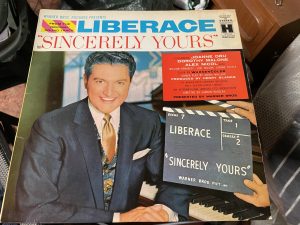 I found this one when cleaning up my garage of mystery. Belonged to my parents, I haven’t listened to it for nearly 30 years. I need to buy myself a record player one day