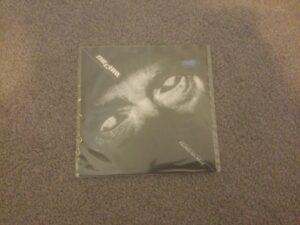 Bought this in the mid 90’s because I loved The Cure and Albert Camus “The Stranger”. Only played it once then stored it away never to be played again because the picture sleeve scared the shit out of me, and still scares me today. 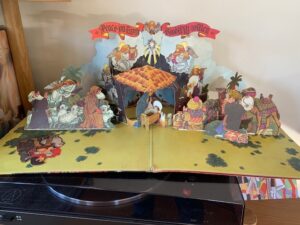 This was a gift from my grandparents when I was 4. I loved the pop up nativity scene so much as a kid, and in fact bring it out to this day at Christmas. There’s some cracker artists on there too, Johnny Cash, Aretha Franklin and, ahem, Doris Day. What more could a kid want! Daggy I know, but it was a great example of what is so captivating about vinyl. Trying to indoctrinate my own kids into the format now. Stuff like this definitely helps! These 4 KISS albums were in a paper bag at the dump in the 90’s. A friend working there salvaged them for me. All are in pristine condition like they were never played! 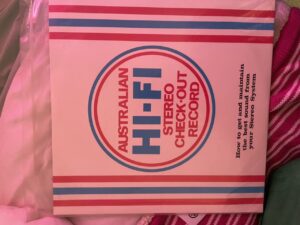 Before the vinyl explosion of 2000’s, I stopped buying vinyls from record shops as the ranges were so small, not alot i was interested in was being released on vinyl, so i’d search at op shops. I got this for $2, included was the booklet, and i keep it as a guide (i still refer to it)
Most record players these days are novel, not for an audiophile, and the great component stereos of yesterday are rare, but you do find them 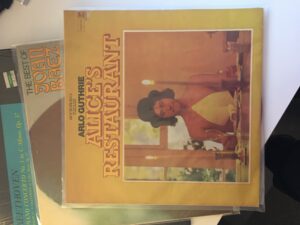 I found this album in a little book store called Desire Books & Records in Manly in Sydney, Australia. It’s from 1967 (https://www.discogs.com/Arlo-Guthrie-Alices-Restaurant/master/72313). It has special meaning to me because my 2nd grade teacher, Miss Messina at Parkside Elementrary in North Babylon, New York, played it for us in class. I remember thinking how cool it was that a grown up was taking the time to explain each song and how important this album was to her and many others. That memory has stayed with me for over 40 years. As soon as I spotted it in the rack at Desire Books, I grabbed it. I probably only paid $5.00 for it. I think I found it around 2018. God love Miss Messina! 😉 After the hearing the opening track, “Don’t try to lay no boogie-woogie on the king of rock and roll” on my car radio in 1971 I went out and purchased the record the next day. Long John Baldry backed many musicians on their albums and this album was produced by Rod Stewart and Elton John with one side each. 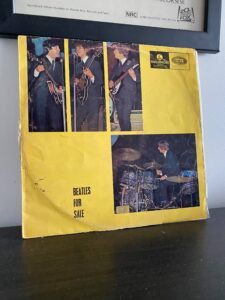 I was lucky enough to inherit my father’s entire record collection back in 2016, including this worse-for-wear copy of Beatles For Sale. My father raised me with The Beatles (being his favourite band) and to be able to hold on to these records, including this original 1965 Australian pressing, reminds me of times spent with him listening to it. It is the oldest pressing I have in my collection and holds much sentimental value, as well as great listening value! I worked with a lady whose father had recently passed away. She asked me if I would like his old hi-fi system for free, as selling it would mean declaring the money in his will settlement. Of course, I said yes and I received a mint condition 70’s style Sony amp and JVC turntable. Getting it home, I was excited, but…there was a problem,..no vinyl to spin! I forgot about it for a while and it sat there for a few weeks untouched as it slipped out of my mind.
Sometime later, I was in the city (i was from out west) and happened to in a Heavy metal store I loved visiting to browse CDs and merch. I also notice they sold new and used vinyl records. I figured this could be the place to finally get a record.
I went in and it had a whole bunch of vinyl for sale for some fairly extreme prices, well, more than I was willing to spend to simply test out this vinyl player and hi-fi (i was a student at the time and ate a lot of canned food if you get me). Giving up looking through the racks, I looked under a table that was partially covered by a sheet. There were crates of vinyl that were unpriced. I began flipping and in my last attempt to find something I could afford and take home, there it was, Hendrix, a name I knew well. I grabbed the vinyl and made my way to the counter, praying this vinyl wouldn’t break my extremely limited budget. The lady squinted and looked oddly at me and the vinyl. “Are these the vinyl Rob is meant to be pricing?” she asked a co-worker working out the back. A casual and unconcerned “I don’t know” came back as she continued squinting at it. She explained the situation that it hadn’t been priced yet and could I come back another day. I explained that wouldn’t be possible as I lived 2 hours away. Seemed that the eager and desperate look in my eyes must have paid off as she said hesitantly, “$10?”…I paused… then hastily replied “ok” without trying to sound too stoked.
I walked out quickly hoping she wouldn’t change her mind. I truely felt like the universe was on my side. The vinyl gods had smiled on me. I got home and put it on to realise there was a giant warp on one side, but it didn’t matter. It went round and round and that crackle had me mesmerised. This was the beginning for me… 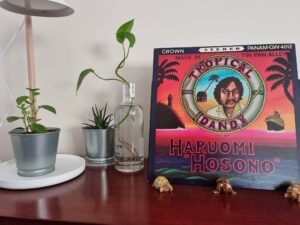 In January 2020 as the world was descending towards a pandemic, I was in Japan for a holiday. Realising I should get home, I booked to get out of there, but before I did I visited a small record store near Shibuya. I found this masterpiece staring out at me, a rarely reissued solo record from Haruomi Hosono of YMO fame. Originally released in 1975, its largely been ignored in the west, although Mac DeMarco did cover Honey Moon and has performed it live with Hosono. I managed to pick it up for a good price on the last day I was overseas (and probably will be for the forseeable future. I love listening to it on cold Canberra nights and dreaming of beaches. 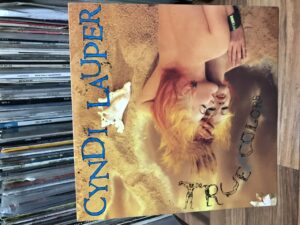 When I was eight, in 1986, I went to a movie premiere with my parents who had won tickets from a local radio station.

There was a note for a prize under one of the seats in the cinema, which just happened to be under mine. Before the film (when films were actually projected on film) started, I went to the front and collected my prize from the most famous radio announcer in Perth, Lionel Yorke. It was my beloved True Colors album, which I still have in near mint condition today. 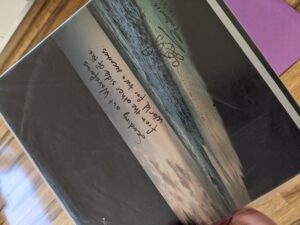 My first, oldest and most favorite. Its what started my collection.
When I finally decided to take the plunge into the world of Vinyl it was on the back of being in love with the rolling base line of Waveform – there was always something comforting and soothing about the way it flows. After hunting down a copy all for myself after months scouring local record stores, I held it close for a few years before I even got a record player to play it on – I just had to have it. Finally to take my love of it to another level I was lucky enough to gingerly cart it round with me for a whole night when Seba was touring just to have him put a for extra words on it – so glad it survived that night!