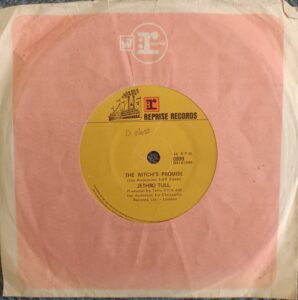 A 1970 single of Witch’s Promise by Jethro Tull

It was 1970 and I had been working at Woolworths in the Seven Hills shopping centre as a Saturday morning box boy and saving my morning pay and the 5, 10 or 20 cent tips that people gave me for packing and carrying their groceries to their car.
At the time, on ABC radio on a Sunday, there was a show which played new release singles. I had been listening to it since 1968 and heard material from Hendrix, The Who, Joplin, Steppenwolf, Doors…, you get the idea.
One Sunday as I was listening, a song was played that was like no other.
There was a mesmerising swirl of flute and, to my ears, what followed sounded like a medieval tune with matching lyrics about a witch played on electric instruments.
I was hooked.
Back in the day, the only place to source a piece of vinyl in Seven Hills was at the “Personal Electric Record Bar’ located in the shopping centre, near Woolworths.
On Monday afternoon after school had finished, I high-tailed down to the shopping centre.
I entered and asked if they had the single, “The Witch’s Promise” by Jethro Tull. I was hoping to buy a copy, that day. The guy behind the counter looked at me like I was a bit unusual.
“I’ll look in the new releases booklet that’s just arrived.” With that he bent down to below the counter, lifted a booklet of several foolscap sheets staple in the corner and began to thumb through until he came across the listing.
“Found it. Do you want me to order a copy?”
“That’d be great.”
With that I handed over my $1 note.
“It’ll be a week or so. Check back next week.”
I left the shop feeling great. I was going to own my first ever piece of vinyl.
All I needed, now, was to either convince mum and dad to buy a stereo or save and buy one myself.
I ended up buying my own AWA stereo but until then, it accompanied me to mate’s places and parties.
I missed the first Tull tour to Australia but managed to see them evolve and grow through every tour after that.
Love all my vinyl and especially all my Tull vinyl. 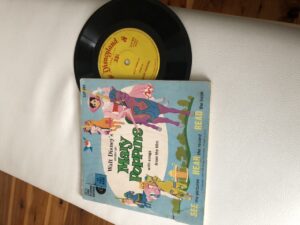 This record my grandparents and parents used to play for me when I was a kid. When my grandfather passed away he handed down his treasured record player to me and this was in his collection. It was the first I received and played on the player. Now I play it for my two beautiful girls. Love the history. Swing a while with Freddy Keil and the Kavaliers

This was my first LP. My parents bought if for me in the 1960s because I’m on the cover! My friends and I were at the playground in New Plymouth in New Zealand one day when Freddy Keil and the Kavaliers turned up with a photographer to get a photo for their new album. We were on the swing and so were they! There aren’t too many people who get to be on an album cover but I did! 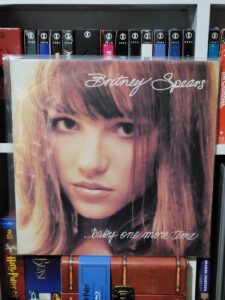 My late grandfather took me with him to a record store years ago, i was so bored in there as i thought it was just old music on records. almost as if it was waiting for me this britney record was sitting at the front of a pile and was 10 bucks, this was before prices took off. my granddad new i was a big britney fan so he didn’t even ask, he just picked it up and handed it to me with a big smile..he could tell by the smile on my face that he had already won me over, it is a 1998 Italian pressing, something from the days before her popularity really exploded so it was special to me, i was so happy. me and my grandfather spent a lot more time together after that as i realized i judge to quickly, I’ve been into records ever since. i use to take this record out just to listen to it but since his passing i take it out for the memories as well. 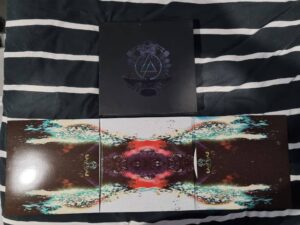 I think I was only 16 or 17 at the time when Linkin Park’s A Thousand Suns came out, a band that kept me sane through my teenagehood. Being raised up in a strict Asian family meant that I couldnt buy things like this, let alone the deluxe edition of this album, it would be impossible to sneak this in without my parents knowing. Luckily I had a friend who had an older sibling that was interested in Linkin Park!! I scraped together all the money I had to buy this album and gave it to him! He even asked if it is okay with my parents, I mean if it was okay I wouldn’t be asking him! But thankfully he still bought it for me, fast forward 10 years (I still hadn’t played the album because I didn’t have a record player) I finally played the album and the story of how I got it will never be forgotten. 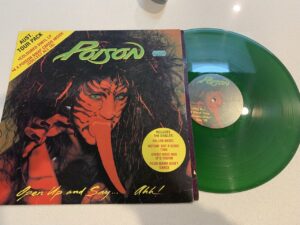 Poison – Open Up and Say….Ahh!

I must have been 11 or 12 years old when my dad bought this record for me. I remember begging for it on a visit to our local Brashs. Poison had just toured Australia and they’d even reached the heady heights of a gig on Hey Hey It’s Saturday! They were big time. And to a boy from the suburbs, they were as bad to the bone as you could get, with their big hair and even bigger attitudes. I remember treasuring the swap cards that came free with the album, featuring my new favourite glam rockers amidst a bevy of scantily clad ‘nurses’ and ‘police officers’. I remember proudly showing off the bright green, limited edition pressing But above all I remember rocking it out to Your Mama Don’t Dance with the volume up high. While my vinyl collection has got a little more ‘sophisticated’ these days, Poison still finds pride of place in the collection and even makes it onto the turn table every now and again. And I’m still a sucker for coloured vinyl! 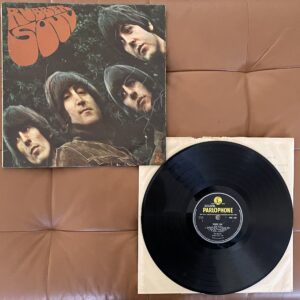 I got this with a lot of other Mono Beatles from my Mother – who i thought had the worst taste in music growing up. My Dad and Uncle (on my mothers side) were the biggest influences on my musical tastes. About 25 years ago in my 20’s I went from buying CD’s back to buying my music on Vinyl. It was then my parents dug out there record collection from the garage and gave it to me. It was full of Led Zep, Beach Boys, Neil Young, Bob Dylan, Cat Stevens etc which my dad told me it was really all his, except The Beatles they were my mothers from before they met, and unfortunately they were all in Mono as she couldn’t afford them in stereo when she was a teen! I absolutely love listening to them, to me now it doesn’t feel right listening to The Beatles without the all the crackles and pops in Mono! 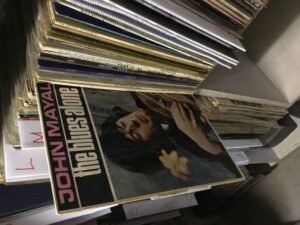 Bought it at the old Record Market in Queen Street, Brisbane. Recall it was my first LP graduating from singles when at high school. Stood out from the Beatles and Stones releases. Might have been a bit cheaper than the usual price for records. Still love his work and even bought his Early Years box set last year. 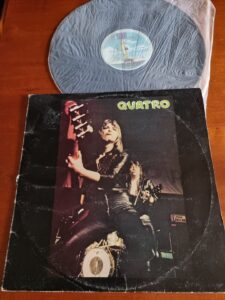 I saved all my pocket money as a 5 year old after I heard Suzi on the radio. It was my very first purchase of anything with money I had saved. It helped fuel my love of vinyls and rock. 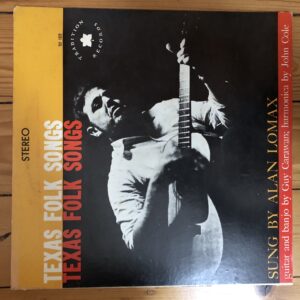 I’ve been collecting records since I was 12 years old (I’m 56 now..) but this is chronologically the oldest one I own.
How did I get it? I pay a monthly visit to see Phil at The Vintage Record, Annandale. And always find something I never knew was missing from my life til I see it in the racks.
In my younger decades I was very exclusive in my listening taste: only punk, then only metal etc etc etc. Age and experience has widened my ears, allowing me to in recent years explore the wonders of folk and country music.
But there’s been one constant throughout: vinyl, vinyl, vinyl! Red Eye records is an institution in Sydney, Australia. There are two stores separated by a lonely corridor walk. The brightly lit warm store houses the new albums, rare collectibles all at import international shipping prices to scare away the casual collector. The other store of second-hand used stock held treasure of a different variety. One came of age in the new store then travelled to find hidden gems in the other. I wasn’t old enough to see A-HA at one of their first world concerts in Sydney 1986 but I did find the picture disc of world tour dates (even though Australia didn’t feature on the map in the centre spindle!) It was my first record but also my first picture disc and I was amazed at how precise the printing was on the surface and how they could manufacture it. It started my love of picture discs (not all are created equally) and I was intrigued equally by what was on the groove as the sound contained within them. The lack of a protective cardboard gatefold sleeve cover alarmed me so I trotted over the the second-hand Red Eye store with my meagre left-over change. I was stunned to find a used second-hand Jeff Wayne’s War of the Worlds LP set with insert pages, graphic design and a wonderful unbelievable price of 98 cents! It started my love of concept albums, rock operas and sleeve artwork. Over the years I upgraded both albums onto expanded remastered CD sets an purchased re-releases of both bands at recent Record Store Days (RSDs). It would take me 34 years to see A-HA play in Sydney and I loved watching Jeff Wayne’s updated reimagining’s on Blu-ray. Those two records (the first that I owned) still hold a special place in my heart and are worth more than what a paid — the a-ha one was considered a fortune — all those years ago. I am glad I came of vinyl age even if I didn’t realise it so much at the time!

This is my first ever record I bought at 14, I had got a JB Hi Fi giftcard that was about to expire and I didn’t really want anything. I saw this and vaguely knew who Vampire Weekend were and saw Diane Young on the tracklist which I loved a cover of. I bought it and started my addiction and recently crossed 100+ vinyls!