I have always had a passion for old music. A few years ago I got into records, I found a box in my garage full of my mums old records from the 60’s, 70’s and 80’s. I bought a cheap record player and started my own record collection. I found this record in an op shop, I didn’t realise what it was at the time – I just knew that it was a great record and I had to have it!. I went home and did some research, turns out this Beatles record I got for $20, is actually a first press, mint condition record that is worth over $150!. The best thing about it is that it still has the original cutout page and sleeve!. Here I am at the ripe old age of 19 with a growing collection that includes over 50 records from the 50s – now!. 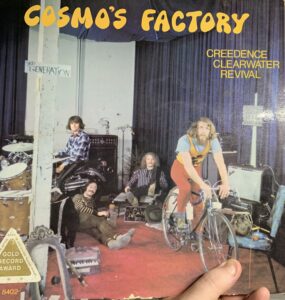 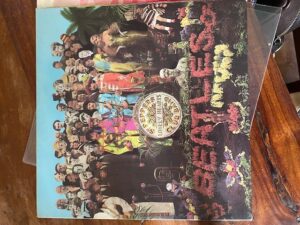 This was a gift from my late mother-in-law (along with the rest of her well loved Beatles vinyl collection) Barb who was possibly the biggest Beatles fan i have ever met. Barb met the Beatles at the Adelaide Town Hall when they visited in 1964 and was interviewed with John Lennon in the Advertiser. This record is played to death. I also own a digitally remastered copy, but the warmth of the crackles and depth of sound on this 1967 pressing is way better 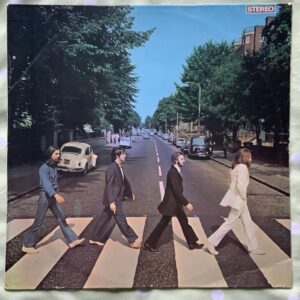 I am a relatively new collector but for as long as I can remember I have always wanted to own vinyl. I think I was influenced by shows and movies, but also whenever I would go to my uncles house he would have it playing and the sound was so much more authentic than what would play on CD! So as soon as I got a job, I bought my own record player and some cheap second hand records from my local record store, including this Abbey Road record, and while I have acquired many more records since, this continues to be my favourite in my collection!!

Duke Ellington – in A Mellowtone

On my first solo trip to New York, I found a record store near Washington square, this was playing on the sound system and I got chatting to the owner about it and life and New York… he took it off the turntable, gave me a great price for such a stunning old record and every time I play it I’m back in that little store in NYC! As a 14 year old growing up in Dublin in the early eighties I visited a family friends home for dinner. The ladies in question had immigrated from Liverpool to Dublin and had brought a very impressive collection of vinyl (and stories) with them. While playing records and discussing music Edwina (one of the said ladies) pointed to a picture frame on the wall which contained a piece of paper signed (To Edwina) by all 4 of The Beatles. at this point my youthful mouth opened and said aloud ” when you die can you leave that to me in your will”. to cut a long story short, Edwina passed away 5 years ago and on my next visit home her sister Carys handed me a package and said, Edwina wanted you have these. The package contained the picture frame and the 4 signatures of The Beatles along with a few original vinyl records including of course SPLHCB, both are very treasured possessions of mine that I treat with the respect they deserve. (see photo for record and picture) RIP Edwina. 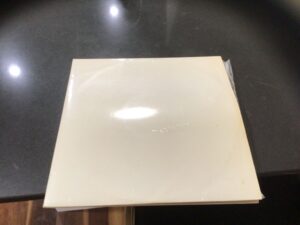 My first job at franklins, my first pay packet, or two, and that’s where it went to purchase the white album, my prized possession 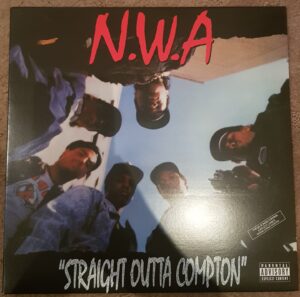 I got this record second hand from someone from Facebook Marketplace. He said it’s about a 10 year old repress of the 1988 album. I only recently started collecting records and it was really nice to get started with this classic hip hop record. I know I will continue to listen to more music and find older and more unique records! 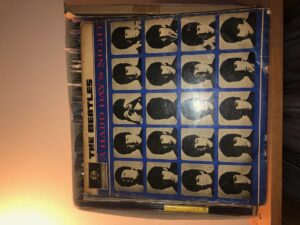 I got this from my father in law who bought this when it came out in 1964.
It’s an Australian Mono pressing but it sounds great. 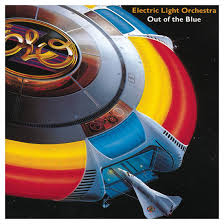 Out of the Blue – ELO

I got this for Christmas 1978, my very first album. I still remember catching a glimpse of it being put in the boot of my Dad’s Toyota Cressida as I looked from the back seat through the small gap created when the boot was open. It was supposed to be a surprise. It had the cardboard spaceship, I loved it! Fast Fwd 5 years and I have sold my record collection, about 30 albums, to fund the pursuit of booze and women.

Over the last five years or so I have been buying copies of the records that made up that original collection.

About 12 months ago I managed to source a mint copy, with spaceship, of the version I think I had as a boy. I now live in Australia so I had to have a copy shipped from the UK.

When I got it, I was transported back to 1978, waiting in a locked car outside a cash and carry in Glasgow, with my two sisters. Cold but excited that our “Santa” gifts were being purchased that evening. 1970’s parenting at its best.

I still love the album, I have so many memories with Out of the Blue as the soundtrack. I used to be desperate to get home after school so that I could listen to it again. I even decided I wanted “jungle” to be played at my funeral! I was a seriously sad git, not that I have changed much.

Jeff Lynne, Richard Tandy, Ben Bevan and others, I once could name them all, made an incredible album. A majestic piece of timeless pop/rock. 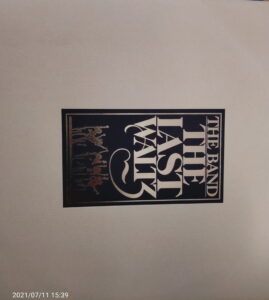 The Last Waltz (The Band)

It was 1978. I was a second year physics student in Trinity College in Dublin – the first child of my entire extended family ever to progress beyond high school. I was paying my own way through university, I ate irregularly, was cold and wet most days, and my only worldly possession – other than first year text books – was a bicycle. That’s how I got to and from classes, cycling 10km each way every day through north Dublin traffic. I was almost nineteen.
One night, I heard a local radio DJ play some tracks from a newly-released album from the US. The first track was by Van “the Man” Morrison – “Tura Lura”, perhaps. We all knew him – a notoriously grumpy, stand-offish musician that, on his return trips to Ireland from the States, was often to be found lurking in Bewley’s Cafe on Baggott Street. Everyone knew you left Van alone when he was in town. He had a tongue like a half-mad tomcat. The next track was from Joni Mitchell – “Coyote”. I knew Mitchell, and loved her, but even for an ingenue nineteen-year-old the sly beauty of her lyrics and the power of the voice suggested I’d have more luck with Van Morrison if it came to romance. And then, The Band – “The Night they Drove Old Dixie Down”. Who the hell was The Band? Never heard of them. Bob Dylan’s backing band apparently. Nah. Still never heard of them…but, god, that song. The sheer, unadulterated melancholy, the beauty, the story. And, of course, it wasn’t unadulterated at all – there was also a sort of defiant joy. And, how truly familiar was that to a young Irishman – all our wars are merry, and all our songs are sad. I was enraptured. The next day, I went to classes, then after that I went o Golden Records in Baggott Street, and I bought the album. It cost me an entire month’s worth of dinner. It was, by a substantial margin, THE most expensive thing I had ever purchased – including the bicycle. On the way home, it was pouring rain, the 12-inch triple album dangled from my handlebars in a protective plastic bag – it wouldn’t fit in my backpack, and the evening was gloomy and freezing cold. It was so stormy that it was hard to cycle in a straight line. A parked car suddenly pulled out in front of me without checking for half-blinded onrushing cyclists. I smacked at full speed into the rear of the car.
I regained consciousness in the middle of a city street, surrounded by solicitous strangers and a distressed car driver. I was fine, I assured everyone. Even my bike was fine. It was all good. Everyone left. I stood on the pavement alongside the road. I picked up the plastic bag from the gutter.
Record One was broken into two halves.
I was nineteen, and cold and really very poor, and I burst into tears. In the rain, no-one could see me cry. I’m sixty-one now, and not so poor. And I have the album – a new copy bought fifteen years later when I finally admitted to myself that I really should play “The Last Waltz” at least once, and that the first, damaged copy really needed to be let go. So I did…let it go.
Except, of course, I still have it – inside my head. 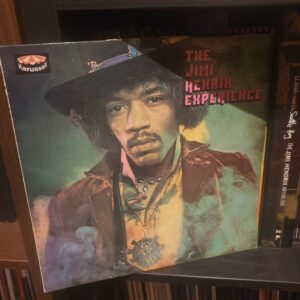 The Jimi Hendrix Experience.
Cover misprint Hendrix
Back in 1992 as a 13 year old, I payed a visit to my elderly neighbours Audrey and Ken.
Ken was enjoying a Crown Lager and Audrey was sipping on an Earl Grey, whilst watching the cricket on the box. I asked if I could have a flick through their small record collection underneath the TV. Audrey said “Go ahead Peter”.
Amongst all the Kamahl and James Last record’s etc etc….there it was…..JIMI !
“WOW” I said….. “Audrey…..Ken where did you get this from”?
Audrey replied with, “Peter that was out late son Ross’s record”. Audrey then said “Would you like it” ? I said  “WOW, are you sure”? Audrey replied. “Yes, Ross would have loved you to have it. Enjoy it as he did”.
RIP Audrey, Ken, Ross and Jimi.