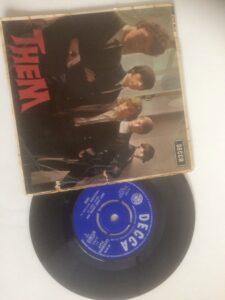 My mum bought me my first turntable as a 7 year old in 1977, a little mono Binatone, because she was fed up with me always damaging the stylus on her music system. I would be constantly playing her Beach Boys -“Greatest Hits”, Simon & Garfunkel – “Troubled Water” and Tammy Wynette – “Greatest Hits” LPs.

Anyway, when she bought me my first turntable she gave me a box of 7″ singles (about 100 all up) that she had bought as a teenager through the sixties. Her grandfather used to give her half a crown pocket money each week and she used to buy a 7″ single and some sweets. I listened to them all religiously, both A and B sides, and my collection of 2000 vinyl albums that I started building from 13 years old (and still own) reflects on the 7″ records that were given to me in that box.

She was a big fan of Them (we’re from Belfast) and apparently she dated the drummer a couple of times in the day! There was 5 of their records in the box along with discs of The Lovin’ Spoonful (who she was also a huge fan of), Beatles, Stones, The Who, Small Faces, Kinks, Francoise Hardy, Supremes, Four Tops, Percy Sledge, 1910 Fruitgum Co., Jay & The Americans along with many others. It was a very eclectic mix and a great introduction to so much great music.

I also loved Them, I think it was because they were from my home city and we felt proud of them, so every time I play this record, I always think of an innocent time as a kid sitting on the floor in my bedroom spinning vinyl all day.

I did actually meet Van Morrison when I lived in Denmark in 1991. It’s a shame to say, he didn’t live up to my expectations as he was quite rude which burst the bubble a bit. However Them were a great band and he did write some cracking tunes which everyone knows to this day. 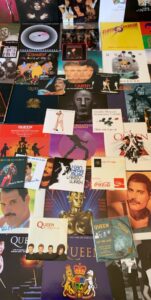 I was visiting through Townsville, Queensland and I found this record inside a small antique store. I was immediately drawn to the title “Beautiful Queensland” I had to buy this record straight away. I had a little trouble playing it at first but after a good clean if sounded brilliant and I quite liked the small pops and crackles due to its age/condition. This record opened me up to the incredible not well known country sounds of the 1930’s and 40’s Australia. I love this record 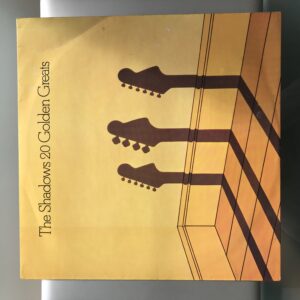 This was the first LP I purchased, aged 12 in 1977 from Woolworths in Aberdeen, Scotland.
An Uncle had the 45 single version of ‘Apache’ and hearing that at a formative age, transformed me into a devotee of all things guitar driven, as well as of the motorik beat.
The LP has been played so often that the grooves are almost worn through!
It has been a lifelong companion.
I had no idea as a 12 year old, that I’d find myself living in Perth, Western Australia, just like Hank Marvin does!
The other week, I saw one of his vintage Stratocasters, on display at Concept Music, where I also purchased a Yamaha Revstar last year.
Talk about closing the circle…💛 I have fond memories as a toddler of listening, singing & dancing along with my mother to Elvis so last year I started searching for original Elvis records and was lucky enough to find an elderly gentleman that was selling his records from the 70s as he had no further need for them. I paid him double what he was asking for as I thought they were worth more! 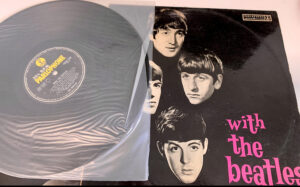 Handed down to me when I was about 13 (now 50) from my uncle who saw them in Sydney as a 12 yo.
Still gets a run a cpl of times a year…
Memories of an uncle who help shaped my love of music.
Family heirloom feels 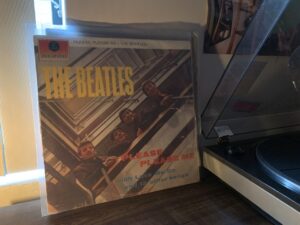 The Beatles – Please Please Me

I found this gem at one of my favourite local Perth record stores, Vinyl Cafe. Digging through the crates I found this, along with Beatles For Sale, $7 each. Score! Got home and realised that this pressing was a 3rd mono Australian press, with a gold parlophone label, which is particularly hard to come by. 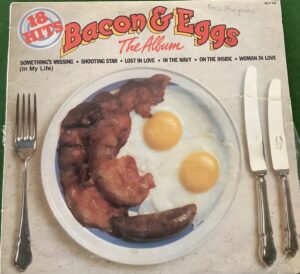 Bacon and Eggs The Album

Bacon and Eggs The Album is the very first record I purchased when I received my first pay check at 16 years of age. 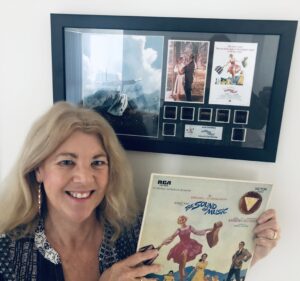 I love to OpShop and I found this fabulous Sound of Music Collectors Edition picture…I just had to find the record album from an OpShop too! After scouring the country I found in a tiny country town in NSW. II found this original 1972 Australian pressing in a small record store in the Victorian coastal town of Port Fairy, which is known for its folk festival. I had never seen this album on vinyl before and the store owner said these sorts of rare records “slip through the cracks” every now and then. I was only beginning to collect vinyl and this was the perfect way to start what has become a passion and at times, addiction! A black and gay rights activist, I have always found Labi Siffre’s songs to be thought-provoking, inspiring, funky and soulful. The fact that his music is still sampled by modern artists such as Eminem speaks to the talent of this musical pioneer. 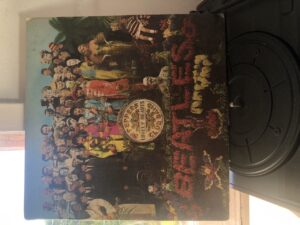 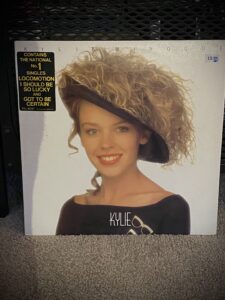 I’m a massive Kylie fan and for my birthday last year, my partner sought out a Yamaha record player and decided to find me some of my favourite albums on vinyl. He found me Kylie’s original vinyl by chance and it’s a prized part of my collection now. Also, who doesn’t love a hat where your hair is free!