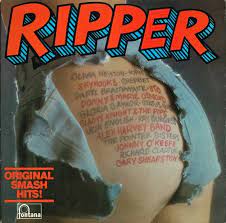 Ripper75, is my oldest and my first LP I purchased, from a long gone CBD record store. The 70’s prepubescent boy in me, purchased this purely on the tasteful cover art and not on the quality of the music. I can guarantee, no Yamaha product will be damaged in any future listening of this.
Its Record Store Day, so off to Replay Records to purchase a long promised LP of ‘Tommy’ & Rainbow ‘Rising’.

First day I ever owned a turn table, I walked into a record store on the way home with my new turn table. This was on the wall and I thought it would be the perfect record to christen my turn table…. I had the CD in my car which I listen to regularly. Had no idea what a white label was at the time

Eterna is a German Record label from when Germany was split into two. The Eterna label was in the GDR and has a lot of a history. I picked up a few Eterna records and test pressings from a seller who found them in a vault. I believe I have some of the only records in existence and they’re not featured on discogs.

Mikis Theodorakis- Songs of the revolution

My father bought this record as a youngster in Melbourne. This record contains songs that were banned in Greece during the dictatorship there.

When I moved to Melbourne from Australia, it was the only record I brought with me. This record represents a mixture of childhood memories and resilience for me.

My favourite album by primus.
I received as a birthday gift for my 30th. This started my love for vinyl.
I play it at least once a week.
I’m waiting to upgrade my record player for better sound quality

On my honeymoon, my wife and I stayed in a farmhouse in rural NZ where there was no TV, no wifi and the only entertainment was a CD player with old compilations. One such CD was songs from the 50’s and 60’s and this song was so darn catchy and ridiculous that it quickly became a favourite and we spent the rest of our trip singing it at each other.
For our first wedding anniversary I found a copy of the original 45 and bought it for my wife.
It’s an absolute banger of a song and we love popping it on and listening to the ridiculousness of it and having the memories come flooding back.

‘Grace’ is an all time great. This record is such a big part of so many people’s lives, it must be top of the list for best debut albums of all time! This pressing is the ORG 45rpm version, which I was encouraged to buy by my friend Kye who runs the indie record store ‘Holy Vinyl’ in Adelaide. I’m glad I got it, especially when listening to ‘Lover, you should’ve come over’ which is my absolute favourite of Jeff’s. There’s a bit of a gap between the best records and the bad ones, but when I play this it’s hard to imagine something better than a truly great record on vinyl. Thanks Yamaha, happy Record Store Day!

Handed down from generation to generation until it got to me. Well……ok just from my parents to me

This record is an original release and I got it from my mum who was old enough to be living and vibing in the peak Fleetwood Mac era! My favourite part of the record aside from the music is the way you can tell that my mum loved and played it on repeat! (And now so do I!)

My Dad was a cool cat. He had a record collection to rival the best of them; stored lovingly in the basement, next to his immense library of equally loved books. Beatles, Rolling Stones, Charles Trenet (the guy who sang La Mer), just to name a few out of hundreds.

My mother; a well intentioned but malevolent Marie Kondo was clearing out the house one winter. The annual school Christmas market was on – all proceeds to charity.

What better way to sweep out the dusty old collection of junk in the cellar? I mean, noone has a vinyl player anymore. So it went, and all for a good cause.

A year later, Dad descended into his den of cool, keen to dust off a record for his own enjoyment, and to start dividing them up for his children to enjoy in years to come.

But – there was nothing there. Desperately, he scrambled through the empty vinyl boxes. Under the sack of potatoes? Nothing. Behind the laundry basket? Nothing!

In one dark, dusty corner, he pulled out the last few records left behind: a couple of German folk vinyls, best left to history, and an all-time classic: Rumors, by Fleetwood Mac. Everything else was taken, but this was spared.

A few years later, he tearfully handed me that record, knowing what he lost. I brought it with me to Australia, to escape the brutal, annual spring cleaning of my mother.

While I have nothing to play it on, I treasure it as the last remaining vestige of my father’s wild, tasteful youth.

Have heart – songs to scream at the sun

Vinyl still lives within punk and hardcore. Around 2009 my best friend and then drummer wanted to buy this vinyl. We could only get it from resist records online store (as we lived in Canberra and besides 1 record shop we could only get vinyl from shows). He is a few years younger than me so he asked me to do the online purchase for him. When the record got to my house and I opened it I fell in love immediately so I purchased the exact same record. Unfortunately mine wasn’t double LP like his but my love for records and vinyl started then and I haven’t stopped collecting since. (PS I have not owned a record player for a few years now so my collection isn’t being as loved as I would like)

Other Voices The Doors

When I was moving out of my apartment, I had to toss some things out because there just wasn’t enough space in the truck. I noticed an old record player sitting by the bin. I always wanted to build myself a record collection and wondered if someone just tossed out a perfectly fine record player. At the time, I didn’t know how record players worked so for all I knew it couldn’t play a tune. So I looked up my local record store and carried the heavy thing awkwardly in my arms, hoping the record shop worker would know if it worked. The man working there was super helpful and showed me how to properly set it up. I picked out The Doors record to see if it would play. And It worked! I was totally amazed and grateful for the help as I was so clueless. The record reminds me of how I lucked out on a free record player and started my journey to building my record collection.