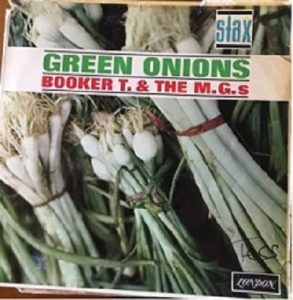 `Green Onions’ was the first album I bought in 1962. Living in London I became very interested in R&B from the USA and used to lie awake late at night with my transistor radio tuned to Radio Luxembourg. It was on that station that I first heard this record. I bought the single, then the EP with different tracks, and then the album which I ordered from my local record store where the following year I got a Saturday job. Twenty years ago I became a radio presenter. I still sometimes play tracks from the album on my program `Groovin’ With Sister T!’ 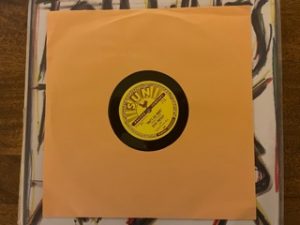 The oldest record I own is an original 78’ pressing of Elvis Presley’s That’s all right and Blue moon of Kentucky on Sun Records. I felt the need to respond to this email as the story is quite amusing, heartfelt and begun an obsession with records and collecting. I have always loved music, and as a young primary-aged man, I would compete in the talent quests at school. I was obsessed with Elvis, his voice, the blues-infused rock ‘n’ roll, and his charisma. I collected all his music, joined the Elvis Presley fan club, dressed like him, and memorized the lyrics to all his music. I was asked to perform some Elvis covers at the local retirement home in Gerringong as a year 5 and 6 student. The old dears would stand, dance, cheer and sometimes boo and hurl abuse- you’ve got to love their honesty. I am currently 39, and when I was in my twenties, visiting my Grandmother, who had since moved into the retirement home, a sweet lady started chatting to me at the kiosk where my Grandmother volunteered. She asked whether I was the same boy who once performed for the oldies in the auditorium. Nervously I responded with ‘yes.’ Gwen, asked me to follow her to her unit on the second floor. We sat in her living room, and I was provided with a black and strong cup of coffee. Gwen proceeded to tell me that she promised herself that if she ever ran into me again, she would provide me with the record that her late husband bought her. Gwen went on to say that our visits really lifted her and her peer’s spirits. With many of the pensioners rarely getting visits from family members. I was elated, not because of the value or the great condition of the record (I did not know anything about vinyl records then); moreover, the fact that my corny moves and innocent voice had such an impact on this sweet lady and her friends. And our conversation had a great impact on me. I would often pop in to the retirement home to see my Grandmother and on most occaisions, I would also stop in for a cuppa with Gwen. The fact that we were able to reminisce and became friends up until her passing in 2012 was a blessing indeed. These days, I still collect vinyl and love everything from the delta blues to the spoken word and so much more. I have a very vast collection, with a particular love for Dylan, Waits, The Pogues, Zappa, Beefheart, and The Stones. I am still very much a fan of Elvis and regularly listen to the 68’ comeback special and many other albums I have in my collection (some very rare). I must add, though, that the album Gwen gifted me, funnily enough, released on my birthday 19th July 1954, has still not been listened to and stays safe between records in my Yardbirds, last rave in L.A. box set. Not only is it my oldest record, it is my most treasured. Thanks David Neale

As a little kid, my Dad had a mate we often visited who had a huge record collection. One day he put this on and I absolutely loved it. I kept asking him to play it, so eventually, he gave it to me, and I still have it, 45 years later!

When I was in high school I started learning the saxophone. My Dad would take me for a sax lesson every Saturday morning, and afterwards we would hit up the local op shops and pick out a record that featured sax, jazz or big bands, go home and listen to our find. One of the first records we found was Winelight. It quickly became my favourite record, and Grover Washington Junior became one of my biggest inspirations. I listened to this record so much I was eventually able to transcribe and play his entire solos for Winelight and Just The Two of Us on my sax, and fast forward 20 years I’m now a professional musician and music teacher and I still enjoy playing these songs! This record brings back so many good memories of fun op shop adventures with my dad, sitting around the record player with excitement waiting to hear what we had found, and the many hours of fun I had practicing my saxophone trying to learn these epic solos. For me, this record was life changing!

As a toddler in England in the early 1970s, my family played a game where they would mix up all the 45rpm singles and I would pick out my favourite to play. What they didn’t know until later was that the ones I didn’t like were ‘posted’ over the top of the water-filled radiators (often used to warm English homes), where they would warp and become unplayable. This Buddy Holly double-A side single was one of my favourites, purchased by my mum back in the late 1950s (her maiden name is visible on one side). She has passed away now, and this earliest single of my collection always reminds me of her and the birth of my love of vinyl music.

I bought this record at a record shop called “Plastic passion” in Mayland WA .I love the unique clean tone of Chet Atkkins.The cover itself takes you places and the music is the Cherry on the top.

My older sister gave me this record when I was 15 and it has never left my turntable since. Brilliant songs and Lennon and McCartney’s song writing are 2nd to none. Sounds awesome on vinyl and brings the real sound back to life. 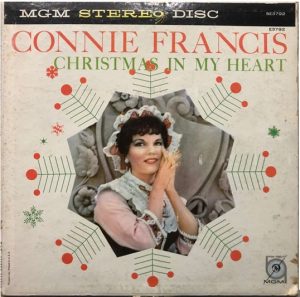 Christmas In My Heart – Connie Francis

When the eldest of my 3 daughters was about 8 years old, in 1983, I bought her a second-hand study desk for homework. The desk was pretty old and cheap because we didn’t have much money back then and I needed to give it a coat of paint before my daughter could use it. When I opened the bottom drawer to take it out for painting, there were about 6 or 7 old vinyl records that had been left there by the previous owner. I don’t even remember what the others were but this one, Christmas In My Heart by Connie Francis from 1959, is now the oldest in my collection and my absolute Christmas favourite!

A colleague who DJed on the side gave it to me for Christmas.

Got it at a record store 2 years ago. As a NO fan I couldn’t afford them all when I was a teenager working in red rooster for $5 per hour in the 80s. Another cog in my collection complete after over 35 years. Thank you record stores.

I am no. 4 out of 6 kids and we were all music mad. Our dad played records in the 60s and mum started buying us all an album for Christmas each year. I was 7 when I received this record in the late 60’s and it was the first that was 100% my own. It ignited a lifelong passion for vinyl and I am still collecting to this day.

I haven’t had this vinyl that long, but it’s very important to me. I was thrift shopping with my son, who I never got to spend much time with when he was growing up. He had recently purchased a record player & was discovering vinyl for the first time. We came across this 1984 original UK pressing 12″ single of William. To my surprise the B side was the first appearance of How Soon is Now? At that time, I didn’t even have a record player. Now I do and I have reconnected with my son over the love of vinyl. I still spin up How Soon is Now & it’s as good as ever!