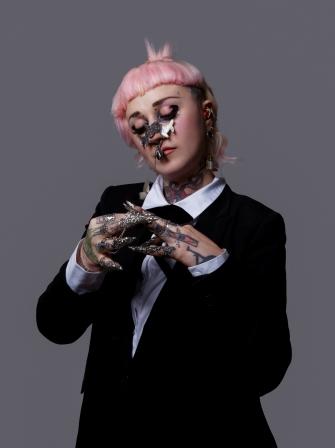 NAI PALM – singer, songwriter, guitarist, solo artist and lead singer of Hiatus Kaiyote – has been appointed as the second and final ambassador for Record Store Day 2021 which will be held across 2 days on June 12 and July 17.

Nai Palm is very excited to be included as one of Record Store Day’s 2021 ambassadors. Along with her Melbourne-based Hiatus Kaiyote band members she has become loved worldwide. The band have been twice-Grammy-nominated, and their records and live shows have won them raves including from The New York Times Jon Pareles who wrote “Hiatus Kaiyote’s music stretches and bends every parameter”.

Growing up with her mother in Melbourne saw their home vibrating with an eclectic range of music including the sounds of Motown and flamenco, African beats and hip-hop. This is now evident in the music she creates. Her musical journey has been life long and influenced her love of all things vinyl, including the local record store.

“Vinyl is forever. Record stores go hand in hand with the local music scene. Playing records is the sonic equivalent of nestling up to a fire. Warm and inviting.  In an age of modern technology where you are in inundated with choice and playlists there’s something sacred about putting on a record and listening start to finish. It comforts the soul. I love going to Northside to see a performance and see people trickle out into the street like confetti. Stopping traffic for the love of music” said Nai Palm

Northside Records is in Fitzroy and is Nai Palm’s local indie record store. Thanks to owner Chris Gill who made the connection and invited Nai Palm to be an ambassador this year.