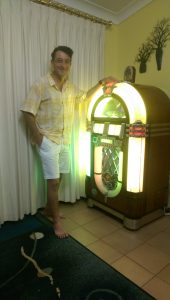 I’m writing this story while listening and watching the latest addition to my music collection a recent Graham Parker career retrospective, it’s a box set which I usually have problems with:- too much music to digest and enjoy properly Bruce Springsteen, Paul Kelly, Frank Sinatra and even the Beatles in mono. However the live DVD was recorded in a pub I used to frequent in Southampton England so it had to be bought; meanwhile also purchased at Christmas but as yet unwrapped are Gillian Welch, The Beatles at the Hollywood Bowl and Beyonce’s Lemonade. I surprised my friends when I bought the last one. Yes I currently own LPs, singles, CDs, cassettes as well as a Wurlitzer Jukebox, a Sonos system and a Spotify account.

How did I get here? Well my dad played semi professionally in a band (as well as church organ) and he would (reel to reel) tape the Sunday chart show so he could arrange the songs of the day to play with his band. I came back from university one day with a copy of Julie London’s greatest hits LP for him to listen too, he passed on the torch singing to appreciate Barney Kessel on guitar, because his guitar player (a guy called Ken) had the same style. I of course then went out and bought some great jazz guitar playing only to also find out he was in Phil Spector’s Wrecking Crew.

I was born near Liverpool so Beatle music filled the house along with Frank Sinatra, Glen Miller and Simon and Garfunkel from my mum as well as Ramsey Lewis, Sergio Mendes and Oscar Peterson from my dad all of which I now own.

However my first purchases were a cover’s pop music LP (played once) followed by Band on the Run played continuously while I played subbuteo on the carpet. I became serious when I went to Woolworths, found the cheap singles rack and bought Message of Love by the Pretenders for 25 pence; I certainly increased my 45 rpm collection in that way for quite some time.

My education continued in Nottingham where I developed the Saturday walk, Selectadisc, Revolver, Virgin and HMV. The former fits the bill for independent record shops which have included Penny Lane (Chester), Ferret and Weasel second hand shops in Southampton and most recently Dada Records in Perth Australia and Basement Discs in Melbourne (where the afore mentioned Christmas purchases came from).

Record fairs it’s funny they’ve changed but they haven’t. Still full of similar people, back with the vinyl, I tend to be with the CD boxes in the minority again (usually me and people (frequently women) of a certain age looking for bargains. I now no longer search for Elvis Costello bootlegs that’s what the internet and YouTube are for; but a bargain, that you weren’t looking for but found remains a treasure.

Which brings me up to modern times and modern technology, the Sonos system with Spotify. When guests are round for the Barbie I always (much to my wife’s irritation) have a playlist either themed for the bash or the latest great stuff I’ve bought, or both. I do requests and they don’t know it it’s mine or if Spotify has provided. If it’s any good I will down load and add to my collection because I collect and I curate. We had a party last Christmas of which the theme was Desert Island Discs a long running BBC radio programme where a celebrity selects 8 discs that they would take to the afore mentioned location. Needless to say all attendees had to send their selections in pre the event and not only did we listen to them all they were printed up on the wall for people to guess who they were from.
Enthusiasm still remains, I recently had the jukebox repaired with a new CD unit and so I’m now adding to it and have it on constant play, there is something wonderfully analogue about looking for the song and having to press buttons to pick it. It has a similar feel to scrabbling through card board boxes on a trestle table or being downstairs in a dingy room trying to work out if I am in a branch of a Fever Pitch-esque shop or somewhere that has no idea and therefore there are plenty of bargains to be had – long may it continue.