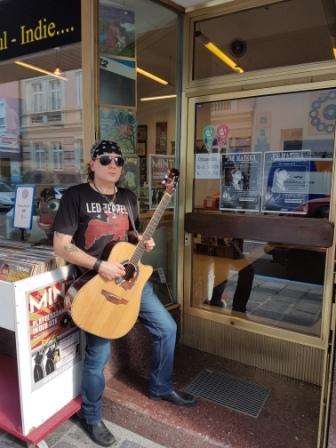 Yet another Australian muso better known overseas than in his home country, Melbourne’s Joe Matera is back from Europe and will be here for Record Store Day. Joe’s fans are largely in Europe, in particular Germany and Austria as well as the Netherlands. He has also exclusively revealed here his obsession with Gerry Rafferty’s City to City! BTW that pic is taken at one of Joe’s favourite indie stores: Vinyl Corner in Linz, Austria.

Anyway, he’s back on home turf for a while and shares his ‘music life’ for RSD:

Where did my love of music and collecting come from? It came from the same place and time in my early childhood. In fact, I remember vividly at age four, pointing to a Beach Boys album in a record store, (the Pet Sounds album, the one with the green cover) and asking my mother to buy it for me. From that moment on, so began my passion for music.

As I grew from a child to a teenager, my tastes took many detours into different styles and artists. I also spent a lot of time listening to my parents’ vinyl collection, early 45s to a variety of 33s. My teenage years were spent buying the latest vinyl releases, which included everyone from Skyhooks to Supertramp to The Police to hundreds of others. Moving into adulthood I continued my love of collecting and listening to not only vinyl, but later in the 1980s to CDs. A lot of my music I listened to, also seeped its way into influencing my own songwriting music and my approach to the industry which remains with me today.

Currently, I am signed to Dutch label RVPrecords in the Netherlands, whom released a Best Of album last year titled ‘Now And Then’ in Europe. The label supports me 100% with my approach of releasing my music on CD (and vinyl) only. None of my music is available on the digital platforms. To many people and other labels this may seem a crazy approach, yet for my fans and the audience that my music is at aimed at, it is perfectly suited and welcomed. My fans buy CDs and love owning a piece of real music (ie CD) in their hands. They do not want digital releases. The same goes with vinyl. Nothing beats the warmth and feel of vinyl and the experience of it all. And cassettes, which over the years fans have asked me about and which this year, I am releasing a ‘Live In London’ cassette as part of Record Store Day. When I toured Poland in 2014, I saw many street billboards advertising tapes! So that format is definitely alive and well in certain places.

One album that has remained a favourite and fuels my collecting passion is Gerry Rafferty’s 1978 classic album City To City.

Over the past few years, on every European tour I do, I spend my days off seeking out the various vinyl pressings of the album from all over the globe which, according my knowledge, there have been over 90 pressings made thus far! I love walking into a record store in different country and finding a pressing of this album on vinyl. So far my collection, which is growing nicely, includes pressings from USA, Holland, Italy, England, Portugal, South Africa, Canada, Germany, Australia and others…it is quite interesting to see the contrast between pressings too, from the cover being slightly different in shade to track listings being totally different, such as is the case with the German pressing which has a different track listing on back cover to what is actually on the vinyl!