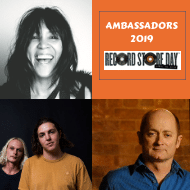 Such a fantastic line up!

Multi ARIA award winning Kate Ceberano, performing, writing and now Record Store Day ambassador for 2019. Most recently she has been artistic director for the Adelaide Cabaret Festival, transforming it into one of the most successful festivals in the country, received an Order of Australia in 2016 and the only Australian woman inducted into the Australian Songwriters Association Hall of Fame. And now she’s got the band back together and is on tour with I’m Talking and the APIA Good Times Tour.

Lead singer, rhythm guitarist and songwriter with iconic Australian band Hoodoo Gurus, Dave Faulkner is another inductee to the ARIA Hall of Fame.  The Hoodoo Gurus are also inducted to The Age Newspaper’s E.G. Hall Of Fame in 2011 and Dave was personally inducted into the Western Australian Music Industry Hall Of Fame (WAM). Dave has also been a judge for the prestigious Australian Music Prize since inception fourteen years ago, and has been chair for the past seven. He is also chief music critic for The Saturday Paper.

Rounding out the line up are indie stars and surf rock supremos are Zach Stephenson and Billy Fleming, aka Hockey Dad. With a much anticipated second album about to appear for Record Store Day, they are the perfect addition to the Record Store Day ambassador team. They been relentlessly touring to sold out crowds around Australia, the UK, Europe and North America since the release of Boronia in 2016 and now they’re joining our team. It’s been an amazing ride for two young blokes from Windang, NSW!

Please thank our ambassadors. They do this out of the goodness of their hearts and not for filthy lucre. And we appreciate it beyond words.

Media: for interviews with the ambassadors please contact Julie Cavanagh at Cavanagh PR.