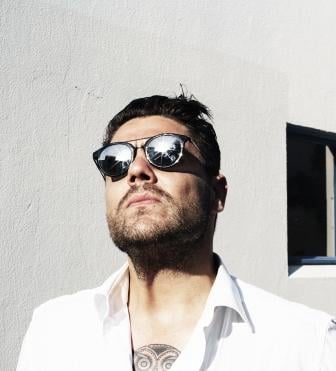 Welcome back to Dan Sultan as an ambassador for Record Store Day 2018! We are so pleased that he could join us this year.

This is Dan’s second turn in the hot seat, having been ambassador back in 2014.

To watch Dan Sultan hold an audience in the palm of his hand is to see a storyteller unafraid to lay it all out there. Ever since Sultan delivered his debut album, Homemade Biscuits, in 2006 at the age of 22, music lovers from all walks of life have found a home in his ability to bare his longings and his wounds, his rich and soulful voice spilling all sorts of guts and glory over memorable rock, roots and blues hooks.

Following Homemade Biscuits came Sultan’s sophomore effort of 2009 Get Out While You Can featuring fan favourite ‘Old Fitzroy’. Get Out While You Can earned the artist two 2010 ARIA Awards (Best Male Artist Best, Blues & Roots Album), Best Independent Artist at the 2010 AIR Awards as well as Male Artist of the Year and Best Single Release (for ‘Letter’) at the 2010 Deadly Awards – the song also earning Sultan an APRA nomination for Breakthrough Songwriter of the Year.

After finding a home at Liberation Records, 2014 saw the musical return of Dan Sultan with the release of his critically acclaimed record, Blackbird. The album was recorded at Nashville’s Blackbird Studios with producer Jaquire King (Tom Waits, Buddy Guy, Kings Of Leon). Featuring hits ‘Under Your Skin’, ‘The Same Man’ and ‘Kimberley Calling’, it debuted at #4 on the ARIA Album Charts and saw Sultan’s star rise further into the stratosphere. Later that year, he performed at the ARIA Awards, also winning the award for Best Rock Album. He also won Best Independent Blues & Roots Album at the AIR Awards as well as the National Album of the Year for Blackbird, National Song of the Year for “The Same Man”, National Cover Art of the Year for Blackbird and was named joint Artist Of The Year with Jessica Mauboy at the NIMA’s.

In July 2017 his fourth and most recent album was released, the hugely anticipated album, Killer. Influenced by an innovative pop landscape, Killer takes Sultan’s honest storytelling into uncharted territory and exhibits a sophisticated leap forward in production and instrumentation. Lyrically, Sultan pushes into some of his most personal and political realms yet. The songs which include ‘Magnetic’, ‘Hold It Together’, ‘Kingdom’ and ‘Reaction’ are inward, reflective and painfully honest. Recorded with producer and long-time collaborator Jan Skubiszewski at his Way Of The Eagle studio in Melbourne, the album is also a sophisticated leap forward in production and instrumentation for Sultan. The album introduces synthesisers and drum machines to lift powerful rhythms, and heightens emotions with gospel backing vocals that sound bigger than cathedral choirs.

Debuting at #5 on the ARIA Album Chart, Killer earned Dan two ARIA nominations for Best Male Artist and Best Rock Album. Sultan performed with A.B Original at the 2017 ARIA Awards for their collaborative song ‘January 26’. 2017 also saw Sultan nominated for Best Album Award, Best Video for ‘Magnetic’ and Best Song for his work with A.B Original on’ January 26’ at the 2017 NIMA’s nominated.

Dan Sultan has regularly toured throughout the course of his career, from sold out audiences on headline tours, to festivals around the country including Falls, Bluesfest, Big Day Out, Port Fairy, Meredith, Splendour in the Grass, The Dreaming, Womadelaide and has supported Bruce Springsteen and Midnight Oil to and His candid, enigmatic performances have earned him a reputation as an outstanding live act. He will hit the road across April, May and June on the Killer Solo Tour. Killer is out now via Liberation Records. For tour dates visit Dan’s website.