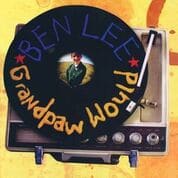 This is the 25th Anniversary reissue of Ben Lee’s debut solo record released on Grand Royal in 1995. The first disc is the remastered version of Grandpaw Would. The 2nd disc is a mix of covers, demos, previously unreleased recordings as well as songs from an EP and a 7″ single. This will also come with a deluxe package booklet that features testimonials from the likes of Mike D (Beastie Boys) Damian Abraham (F*cked Up) Sean Tillman (Har Mar Superstar) and others. Pressed on Birthday Cake Splatter Vinyl.