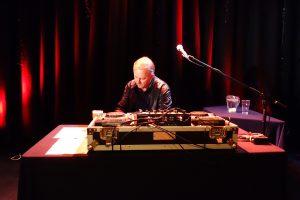 Record Store Day in Australia has announced music lover and DJ, Anthony Albanese is the final ambassador for 2017!

Perhaps better known as the Federal member for Grayndler, former deputy prime minister and member of the Shadow Cabinet, the magnificent seventh ambassador for Record Store Day in Australia is a passionate music lover and DJ. ‘Albo’ is a familiar face in the many record stores in his electorate as well as at live gigs, most recently Adele, The Pixies, Spiderbait and Nick Cave. He owns an extensive record collection which includes his first record ever which was Elton John’s Honky Chateau and the record he is most proud of owning is Midnight Oil’s Bird Noises. He strongly believes in live music as a force for enriching communities and as an industry providing jobs.
He also performs as DJ Albo, spinning records from the 80s and 90s, as well as the current day. His set list includes titles as diverse as Florence and the Machine, Kirsty McColl, The Go-Betweens, Kate Miller-Heidke, The Clash and Courtney Barnett. Gigs have included Newtown Social Club (Sydney) and Melbourne’s iconic Corner Hotel. His gigs are largely fundraisers for his work with Reclink, the music-industry based charity that seeks to engage disadvantaged youth through sport and the arts.
He has hosted Rage and likes to quote rock lyrics in his speeches to Parliament.