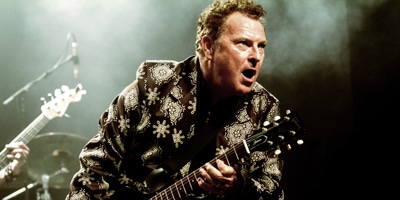 Can’t tell you how rapt we were with this year’s line up of ambassadors … and then the virus hit. But thrilled to say this legendary Australian artist, who signed up for the day that wasn’t, has come back for more. The one, the only Mr Ross Wilson.

And you’ve got Eagle Rock going round in your head now, don’t you?

There will also be a special very limited edition run of Mondo Rock’s first live album on translucent blue and purple vinyl and on CD. Just 300 copies of the record have been pressed. Summer of ’81 features all the hits from Chemistry, Mondo Rock’s highest selling album. It also includes a Mondo Rock rarity that never appeared on a studio album – ‘Slice of Life’.

Ross will be man in the media over the next coupla weeks, talking about RSD Drop August PLUS we’re planning some live streams (corona willing).  In the meantime, this is what he has to say:

In my youth I became a dedicated vinyl hound. Once you start it’s hard to give it up. To wonder at the awesomeness of a needle in a microgroove that somehow becomes full spectrum sound – it is magic. So I am very pleased to have been anointed as the ambassador for RSD Drop August. August 29  is the big day.

1 thought on “Announcing: Ross Wilson is the ambassador for RSD Drop August”