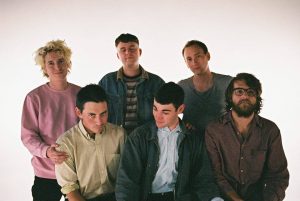 Last year we had suck a killer Saturday celebrating Record Store Day Australia that this weekend we thought we’d make a weekend of it!
We’ve already announced that we have the great locals Halfway playing on the Saturday, and now we’re doubling down and announcing awesome Melbourne-based indie rockers The Ocean Party will be playing a free instore in Sonic Sherpa on the Sunday, joined by killer NY-based outfitMichael Angelheart Band (formerly known as Shorts) and Melbourne artist Zayd Thring (from Pets With Pets).

The Ocean Party have carved out a massive niche for themselves in the Australian scene in the last handful of years, the six-headed beast having released six albums since 2011 (predominantly through killer Sydney indieSpunk Records) and proved in the process to be as consistent and reliable as they are prolific. Their most recent effort ‘Restless’ (2016) was all killer, no filler and they’re a brilliant live proposition with as many vocalists as they have songwriters (ie plenty).

Michael Angelheart has also been around the traps for many moons, playing in the US incarnation of Scott & Charlene’s Wedding as well as many other fine projects, and is now living on the Sunshine Coast. Zayd Thring is best known for being a co-founder of Melbourne psych veterans Pets With Pets but has played frequent solo shows along the journey so should dazzle in the close confines of Sonic Sherpa.

The Ocean Party have just completed a massive American tour which by all accounts went swimmingly so will no doubt be in fine fettle by the time they drop by Sonic Sherpa to help us celebrate RSD ’17!

As always it’s a free, family-friendly event and BYO, come find yourself some RSD treasures at Sonic Sherpa and catch some top-notch live music in the process!